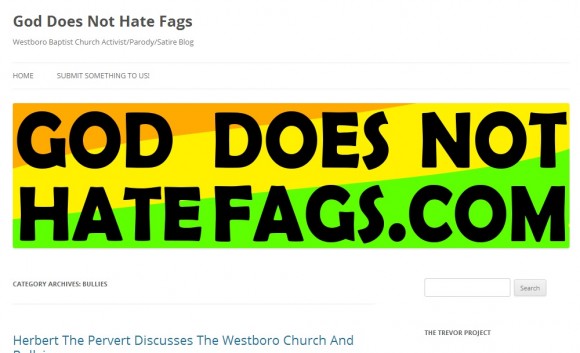 No two people are the same on this planet. Even identical twins have certain differences. As such, while there are those who have a good heart, there are also those who often find fault in others and can’t seem to accept other people for who they are.

It is unfortunate that there are humans who discriminate against certain people particularly those in the third sex. They even explicitly show their dislike to this group and uses online tools such as the blog to express their hate towards gays and lesbians.

Fortunately, there are good samaritans who come to the defense of gay people. This is the main essence of the blog God Does Not Hate Fags.com, an Anti-Westboro Baptist Church activist and parody blog written, directed and produced by Allen McNulty. The blog is a pro-gay site that uses satire and humor to make its stand against the vitriolic hate of the Westboro Baptist Church.

On the site, readers can watch short videos of varied types but the author warns that the content of the site should not be taken seriously as they’re merely meant to provide humor to readers.

The blog’s name, according to author McNulty, is a parody of the church’s domain name God Hates Fags.com.