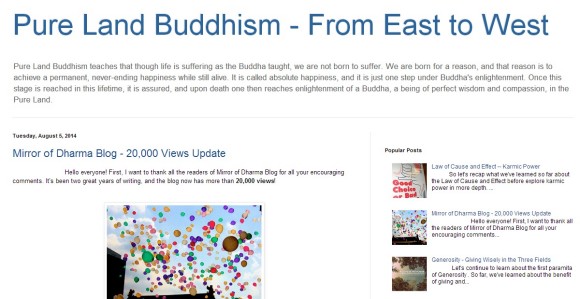 Buddhism is one of the most widely practiced and fastest growing religions in the world. Although it is practiced primarily in Asia, this religion that focuses on the teachings of Buddha is now common in other parts of the globe. It is estimated that there are now from 350 to 550 million Buddhists worldwide.

To learn more about Buddhism, the blog Mirror of Dharma.org is a great online resource to follow. With a focus on Pure Land Buddhism – From East to West, the site teaches the real meaning of Buddhism which is beyond suffering. The blog puts emphasis on the positive aspects of life such as giving, doing good deeds, respect, gratitude and compassion which are vital in achieving a permanent and never-ending happiness.

Find your true self within Pure Land Buddhism on the Mirror of Dharma.org site.